I wanted to create some fall decor that would carry from the beginning of sweater weather all the way through Thanksgiving (at least.) I’m not really into the idea of disposable decorations. I want something that’s worth boxing up neatly and pulling out again year after year. I’m been absolutely in love with feathers lately, so I created this garland. It’s perfect for hanging on a wall (as I’ve shown it here) or dressing up a table. 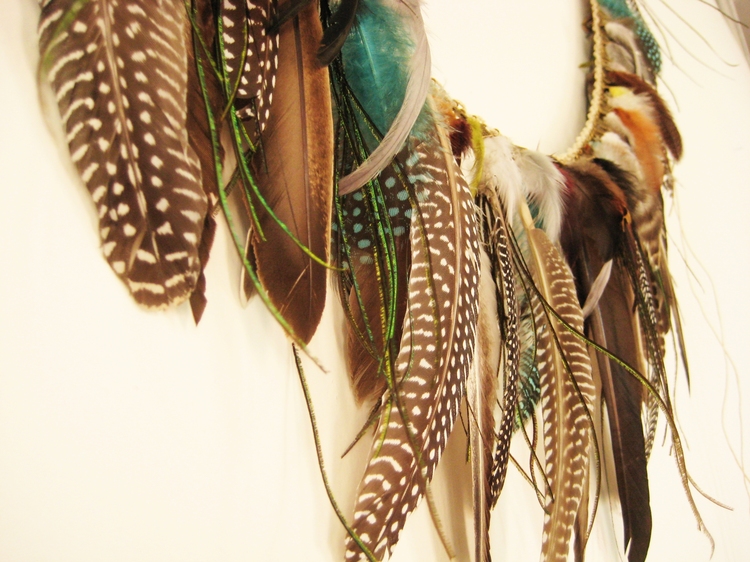 Supplies:
– string – this is hemp twine, I picked it for the color, small inconsistencies and that it lasts forever
– feathers – craft stores are good, but fishing tackle suppliers can be even better
– metal fold over findings OR craft wire and this tutorial (the findings are faster)
– jump rings
– needle nose pliers

The garland shown here has about 125 feathers on it and stretches about 3 feet. I could have spread the feathers farther apart but I liked the intensity of keeping them closer.

First, add a fold over finding to each feather. Some are two sided like this, and some don’t have the little back piece of metal, just the side tabs. Both work.

Slide the feather into place and fold the piece that’s joined at the top down. You may need to flatten thicker feather stems with the pliers to make them fit.

Close one side tab neatly with the pliers.

Then close the other.

Double check that the feather is secure. If this isn’t enough you may want to add a dot of E6000 or a similar glue to each one before you close the finding.

Make as many as you want and then add a jump ring to each one.

To garland them all together I started by laying the feathers out on the floor. That way I could evenly distribute the different kinds and determine about how long it would be.

Pull out enough twine for the length of the garland and some end ties (generously) then fold the twine over and tie a loop. The loop is for hanging it, modify this if you have a different plan. Don’t cut the twine from the ball yet.

Slide a feather (jump ring) onto the twine and slide it up to the knot. Tie a knot around that strand with the other (I passed the ball of twine over that strand and through it’s own loop.) Tighten that knot, slide in another feather, tie another knot. This is just to keep the feathers spaced. You could alternate feathers and wooden beads if you like that look more.

This was mine after tying a bunch of feathers in place. When you get to the end tie another knot, then hang the garland. 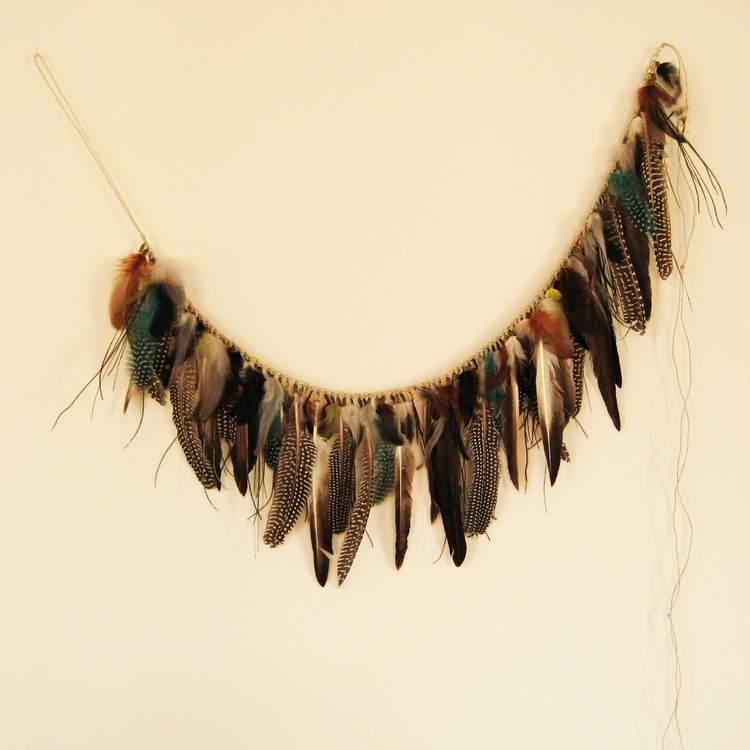 I’ve decided that this is much too short so I’ll be extending this project into a much longer garland in the future!