This tutorial covers how to make this sparkly pair of baubles, built around a glass pearl, or whatever other feature bead you have in mind. It would be a great use for some semiprecious gemstones or maybe some other pretty glass. These beaded earrings can work for dress up or dress down looks, depending on how you style them. You should have a solid understanding of even count peyote before you start, and if you’ve never tried it before, our Peyote Beaded Rings should get you up to speed.

Cut a nice long strand of thread to be doubled. Put the two ends through the needle, leaving a loop at the other end.

Thread a pearl on, then enough 11/0 seed beads to wrap around half. Be careful that they don’t slide off the end of the thread. It took me a couple tries to figure out just the right amount. Use the same number on both sides of the pearl to make sure that you end up with an even number of seed beads, total. 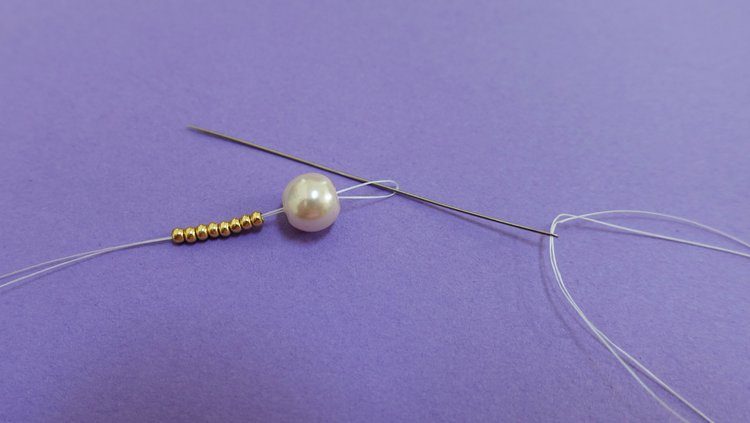 Slide the needle through the thread loop and tighten it up carefully.

The row of beads should fit close to the bead without gaps between the beads.

Add the same number of beads as the first side, and run the thread through all of the beads to make sure the loop is solid.

Now do a row of peyote stitch. Add one bead to the needle. Skip a bead on the base row and slide the needle through the next bead. 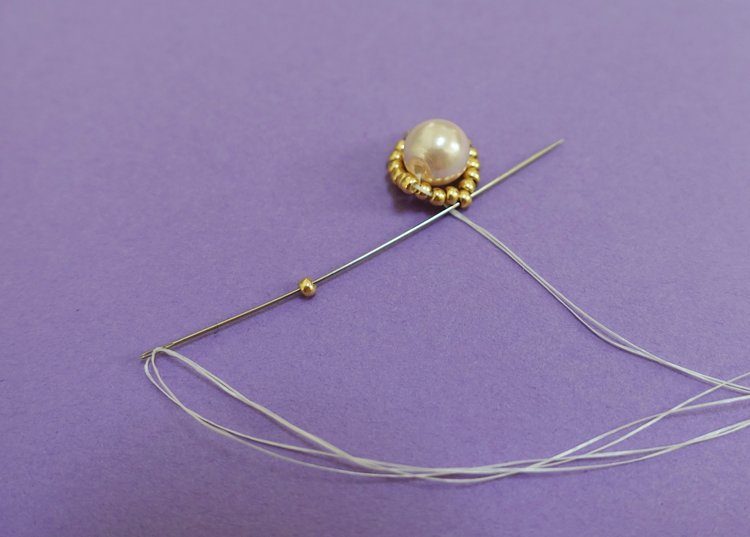 Continue the add a bead, skip a bead pattern until you’re all the way around. 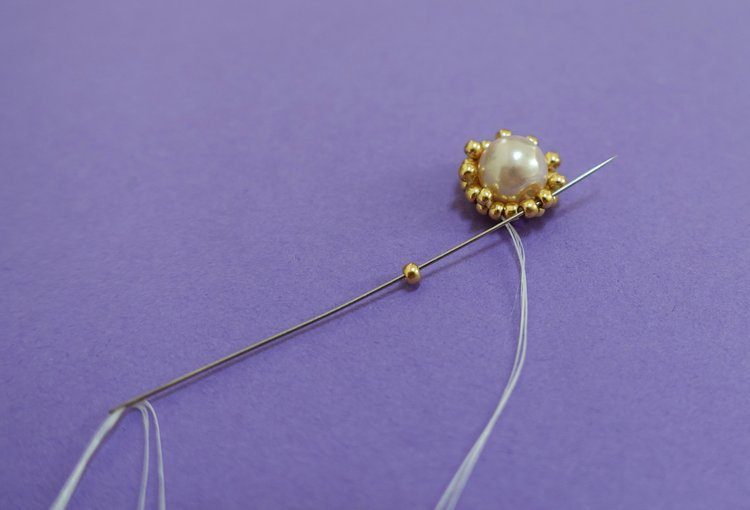 At the end of the row go through the base row bead, and the first bead added in this row to ‘step up’ for a new row.

Ready for the next row.

Do another row of peyote the same way, until the last stitch. 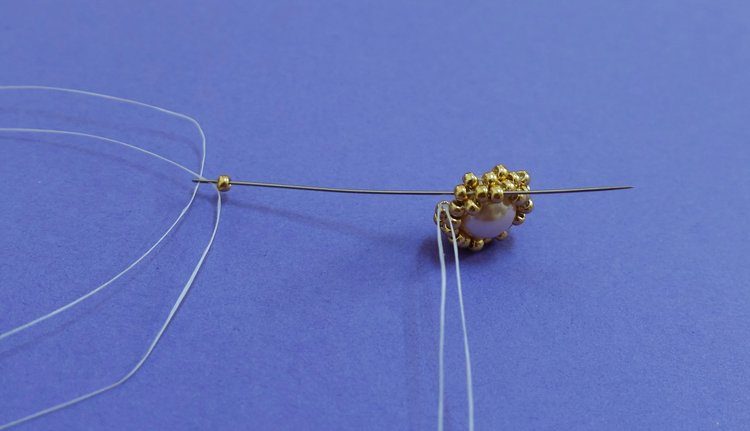 At the end of this row, cross to the other side of the peyote strip.

On this side, you’ll be going the opposite direction (because you flipped the piece over), but carry on with the same peyote stitch  method. 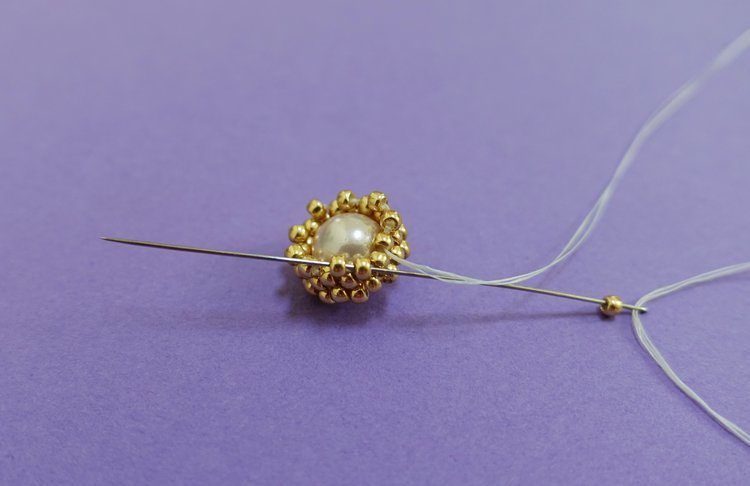 At the end of this row be sure to ‘step up’ through the first bead of the row. Your peyote row should alternate between 2 and 3 beads wide. 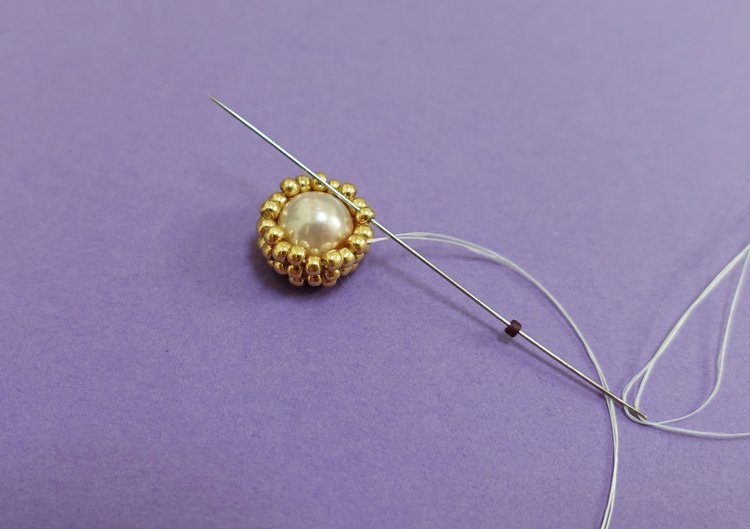 Now switch to the 15/0 beads, and add another row of peyote stitch. 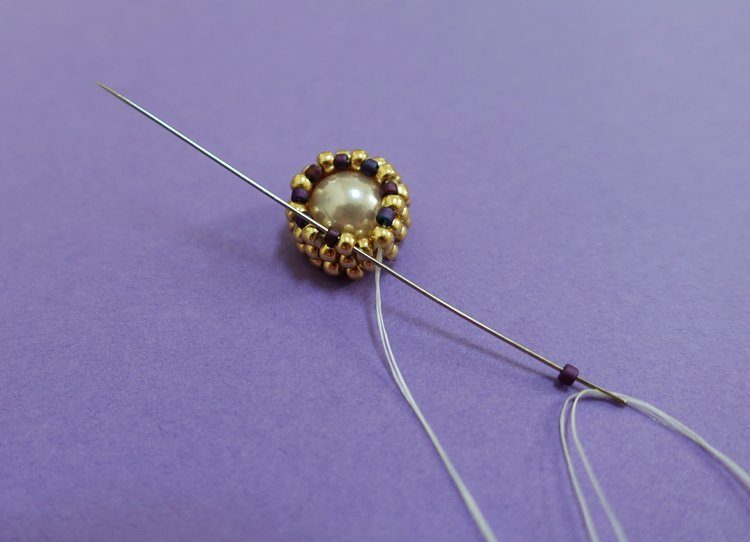 Run through the entire row a second time (without adding any more beads) to make sure it’s even and snug.

Navigate to the other side of the strip, and do the same thing.

Work your way to the center of the peyote band, and do another row of peyote with 11/0 beads. This will be sort of 3 dimensional compared to flat peyote. Look at just the 11/0 part of the strip. You’ll stitch through the center bead when there are 3 beads wide, then add a bead where it’s 2 beads wide. 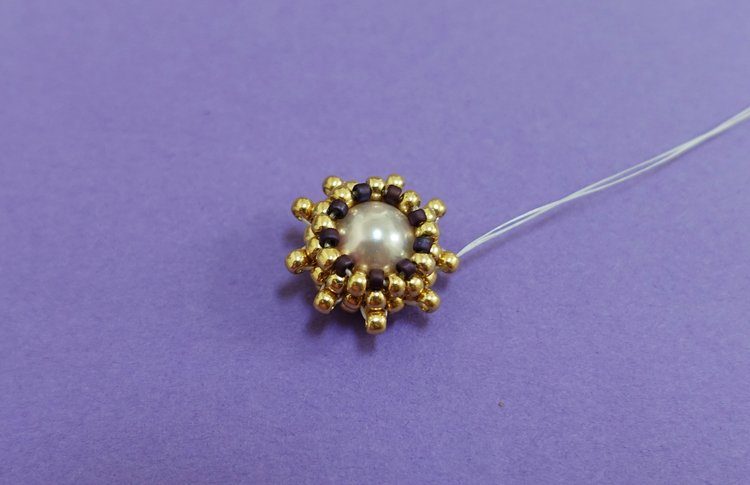 When that row is done you’ll have sort of a ‘spiky star’ look. Make sure you step up through the first bead of the row like always.

Switch back to the 15/0 beads. Add 5 beads in the first gap, then 2 beads in the rest of the gaps going around. If you’re using a center bead that has an ‘up’ you can add those 5 beads anywhere – they’re where the earring hook will go.

Go through that row again, adding another 15/0 in the center of each pair. Just go through the 5 bead group without adding any extras.

Go through that outer ring of beads another time or two, then weave in your string. Trim the tails. 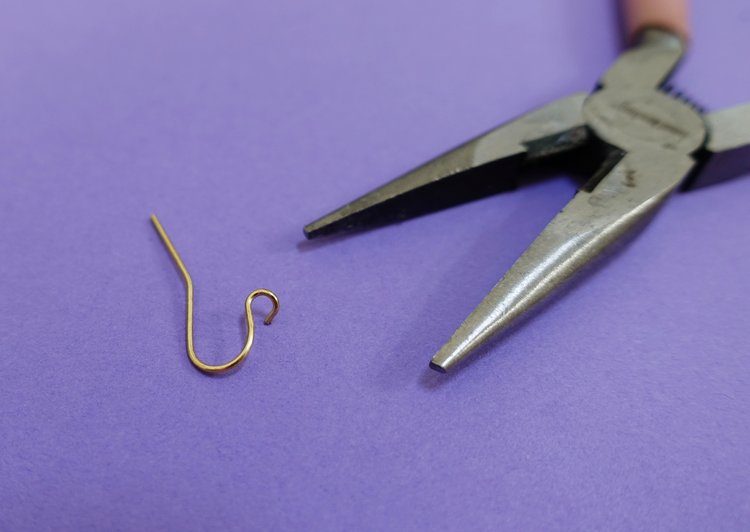 Twist the ear hook open – don’t pull it open. Check out this post for more on that.

Hook the 5-bead loop onto the ear hook and carefully close the loop. That’s it, you’re done… except for making the other one.

This is obviously a project that would look fantastic in tons of different color combinations. Have fun and make lots of beaded earrings!