One of our all-time most popular posts is the Diagonal Basketweave Knitting Pattern. It’s been pinned thousands and thousands of times, posted by all kinds of other bloggers, and caused me to receive a lot of email and comments requesting an “in the round” version. The short answer is that this pattern just doesn’t really want work in the round. But you’ve already guessed that I wouldn’t have made a post just to tell you that. So this is a tutorial for working diagonal basketweave in the round, with a little hack to make it look really seamless. 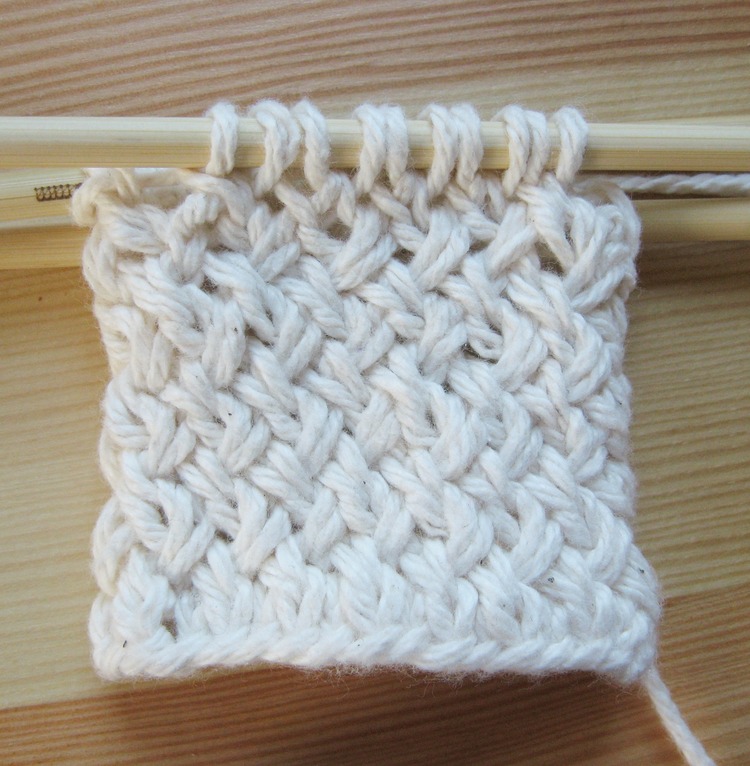 There are two caveats that need mentioning. The first is that beginning of the row moves 1 stitch every row. This isn’t a big deal if you’re making a simple cylinder (like a cowl, for example) but will need accommodation if you’re planning to use this for something like a sleeve that has a more complicated shape. The second is that the end of the row line is visible, but lower in the post I show a way to camouflage it.

Diagonal Basketweave In The Round

knit 1 row in the round (this is optional, but makes it easier and gives you a nice, smooth edge at the cast on)

I’ve already knit a few rows of the pattern here to make it easier to see how it works.

Bring the right needle to the back and slide it into the second stitch on the left needle.

Wrap the yarn around.

Draw a loop through (the same way you would always knit through the back of the loop.) Leave the stitches on the left hand needle.

Bring the right needle around the front and knit the first stitch on the left needle.

Pull both stitches off the left needle.

Repeat that pair of stitches over the length of the row.

You’ll have 1 stitch left at the end of the row. It becomes the first stitch of the next row, so if you’re using double pointed needles as I am, move it onto the next needle you’ll be knitting from. If you’re using double pointed needles you’ll have to move a stitch every time you get to the end of a needle on every row after the first. (You can skip that if you use a round needle.)

Make sure the first stitch you’re going to work was the last stitch of the last row. I know I’m making a big deal about this, but if you miss it you get a rick-rack look instead of a basketweave!

Bring the right needle around to the front and knit the second stitch on the left needle with it.

Bring the yarn through as shown.

Pull a loop through and leave both stitches on the left needle.

Now knit the first stitch on the left needle.

Pull both stitches off.

Repeat this until you have on one stitch left in the row. That last stitch becomes the first of the next row, just as it did after row 1.

Most of the piece will look like flat knitted basketweave.

There will, however, be a sort of “hiccup” in the pattern. Not a big issue if you’re knitting something short, but if you knit this for a long time you’ll have a gap that spirals around and around.

I’ve highlighted the problem here because it’s not really that prominent in this yarn. It can be very prominent with some yarns, though, especially thick, soft, wintery yarns. There’s a relatively easy fix, though.

Grab a crochet hook and a strand of yarn. This could be the tail from the cast on or bind off, or it could just be another strand of the same yarn. Slide the crochet hook into the fabric at the end of the gap line, where there would ideally be another row or stitches angled to the right.

Pull a loop through the fabric.

Slide the needle into the next gap on that line.

Pull up another loop.

In the grand tradition of crochet, pull the second loop through the first loop.

Slide the crochet hook into the fabric again, following that same line.

Pull up another loop.

Again, pull the second loop through the first.

This will fill in that missing right angled row. With a bit of careful adjusting that line can be almost invisible, making your “in the round” look truly seamless.

This is that same shot but with the crocheted stitches removed, in case you’re struggling to figure out exactly where I placed the stitches.

That’s it! I can’t wait to see lots of cozy basketweave knitted projects made in the round!