This openwork rib knit stitch has a nice twisted motif down the centers of the knit part of the rib, and eyelets along the edges of the purl part of the rib. It doesn’t have a lot of elasticity, but it does lay very flat, so it can be used to keep edges from curling.

This swatch is knit with Sugar ‘n Cream yarn in Coral Rose, with US #7 bamboo knitting needles.

yo = yarn over to make a stitch

k2tog = knit two stitches together as one

With the exception of the beginning of the row, you’ve just made a purl stitch at the end of the previous repeat, so the yarn is in front.

To make the yarn over, bring the yarn to the back between the needles (like you’re going to knit), then wrap the yarn up and around.

Put the needle in the next stitch as if you’re going to knit it.

Just slide it over without knitting.

Knit the next two stitches together as if they were one stitch.

Grab the stitch you slipped without knitting.

Bring it up and over the next stitch on the needle. 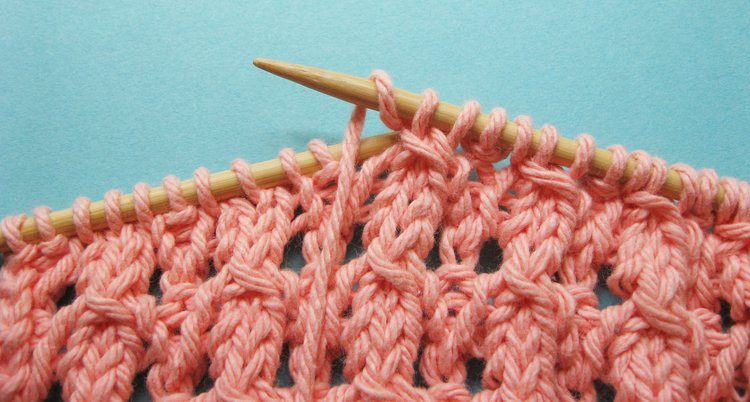 Now you need to make a yarn over that lands the yarn in the front so you can purl it. Bring the yarn to the front between the needles, like you’re going to purl, then wrap the yarn up and around. 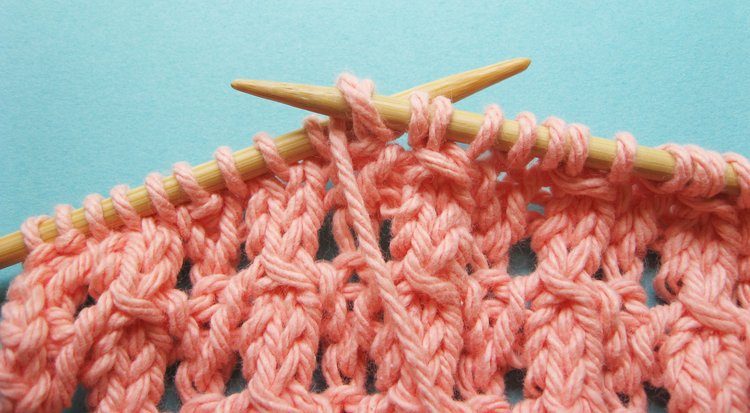 Now purl the last stitch of the repeat.

This is the unblocked swatch laid flat – you can see it’s not inclined to curl. With a different kind of yarn (not a cotton) it’s likely it would have more elasticity and function more like a traditional rib knit.