I’m a year-round lip gloss addict, but I’m even more obsessed with keeping a half dozen tubes of it in my purse when the weather gets cold and windy. I switched over to making my own diy lip gloss for a few reasons – I can control my ingredients, I don’t have to worry about a company discontinuing a favorite, and this project is really inexpensive even compared to drugstore prices (let alone my high-end taste in cosmetics!) This project is really more of a “choose your own adventure.” You can make the most classic basic or a really fancy product, it’s totally up to you. This is definitely an excellent project to keep in mind for gifting, too!

Beeswax is what I used, or carnauba or soy for vegans – look for cosmetic grade or beeswax sold with food. I cut from a block but if you can find pastilles/granulated that’s much easier to work with.

Any consumption safe oil will work, I used half coconut oil and half argan oil. As you make more cosmetic stuff you’ll notice that your skin loves some oils and doesn’t like others. Some people love olive oil in their products, but it makes me break out. Grape seed oil, sweet almond oil, cocoa butter and shea butter are all excellent choices depending on what works for you. Read the labels on your favorite products, they might help you figure out where to start.

I used some Lip Tar that just didn’t work out for me – it gave my gloss a pretty, sheer pink tone. Melting in a slice of lipstick would have worked similarly. Anything that’s colored an food safe is okay here – beetroot powder is popular for a rosy red, some people use food colors or even kool-aid mix for color and flavor. If you’re really into it you can find cosmetic-specific liquid colors to mix in, but once you’ve started looking at cosmetics suppliers there’s no going back. You will totally need that 12 color pack so you can make any shade of lipgloss…

I used cinnamon oil for plumping, and it also provided a very pleasant red hots candy sort of flavor. Cinnamon oil is the plumping agent used in most commercial plumping lip glosses. If you really don’t like cinnamon oil (or can’t find it) I’ve read that peppermint oil is the next best thing, though I haven’t personally tested it.

I’ve had great success with candy flavors for flavoring lip gloss. Lor-Ann makes a wide variety of flavors like lots of fruits, root beer, cola, mints, cinnamon, etc. In the US you can find them in the candy/cake section of craft and grocery stores, though you can usually order a much larger selection online. A lot of recipes online also call for things like kool-aid mix, so that might work for you, too. A word of caution – citrus oils (orange, lemon, etc.) can make you skin more vulnerable to sun exposure so either avoid them or only use them indoors.

I’m using a metal cup lined with a paper cup for melting on a candle warmer – this works well for a small amount, and the paper cup is disposed along with the relatively irritating cinnamon oil when I’m done. A better method, especially for a larger amount of lipgloss, is a pyrex style glass container in a pot of simmering water. Never melt wax directly in a pot on a stove.

A popsicle stick is a great way to mix things, but any ordinary (very clean) kitchen spoon should work.

Wax is annoying to clean off of things, cover your surface to keep it safe.

I prefer to weigh my ingredients so I used a scale. You could also use measuring spoons, especially if your was is granulated.

Your flavors and plumpers will be measured drop by drop. I used a disposable pipette for the cinnamon oil because of it’s intense smell and irritation potential.

Sometimes you can find empty lipgloss tubes in craft stores, and you can find them all over the internet. You can also clean out and reuse tubes you already have.

This is totally optional, I used it to decorate the outside of the tubes. Super cute!

colors, flavors, and plumping to taste

Simple, right? Also the same proportion as popular lotion bars recipe. This seems to be just right for melting at human body temperatures. A word of caution – don’t keep these in a pocket or hot car, they might melt! 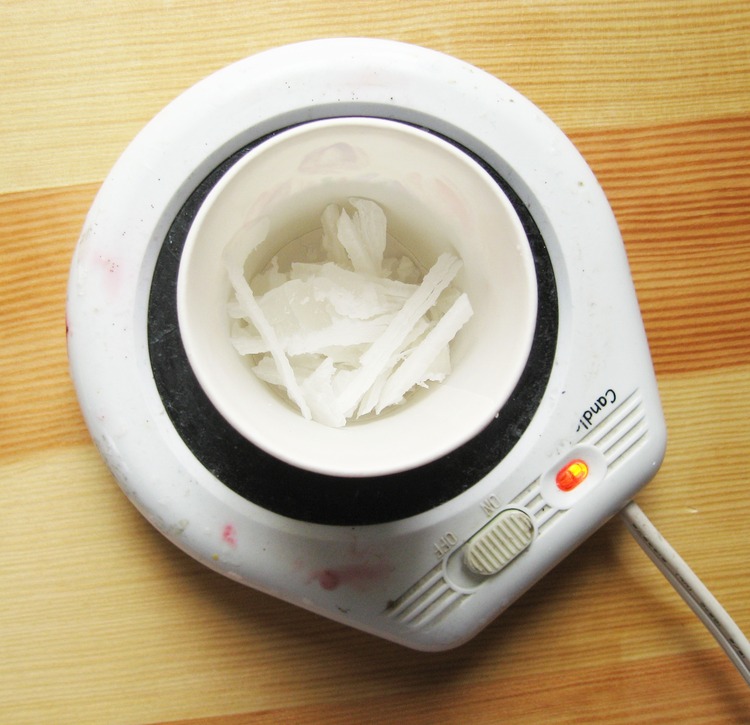 Start by slicing (if necessary) and weighing your wax. I used 5 grams. Start melting it. At this point you don’t stop paying attention until you are done – wax is very safe until it gets too hot, then it’s very flammable.

When my wax was warm and partially melted I added the base oils. I used 5 grams of coconut oil and 5 grams of argan oil. This mix was enough for 3 tubes of lipgloss.

If you’re adding the plumping cinnamon oil (which is totally optional) you’ll need to do it a drop at a time, then test a little on your lips. When you can feel it tingle is when you should stop adding cinnamon oil. In the end, I used about 6 drops per tube (18 drops total for this much lipgloss base) but your quantity will vary. Test it every time you make lipgloss – the impact will vary between brands of oil, containers of oil, and as your cinnamon oil ages. Too much cinnamon oil in your lipgloss will be very unpleasant and possibly dangerous, be careful.

This is also the time to add any flavoring agents – drop by drop, testing until you reach the right level. Write down your recipe so you can refer to it again in the future.

Finally, add any tinting agents. This is a couple drops of the lip tar shown. As with everything else, add small amounts and test until you like the outcome, and then write down your personalized recipe!

When everything is added and adjusted to perfection, very carefully pour it into your lipgloss tubes. Leave it for a few hours to cool and set up. At that point it’s ready to use. 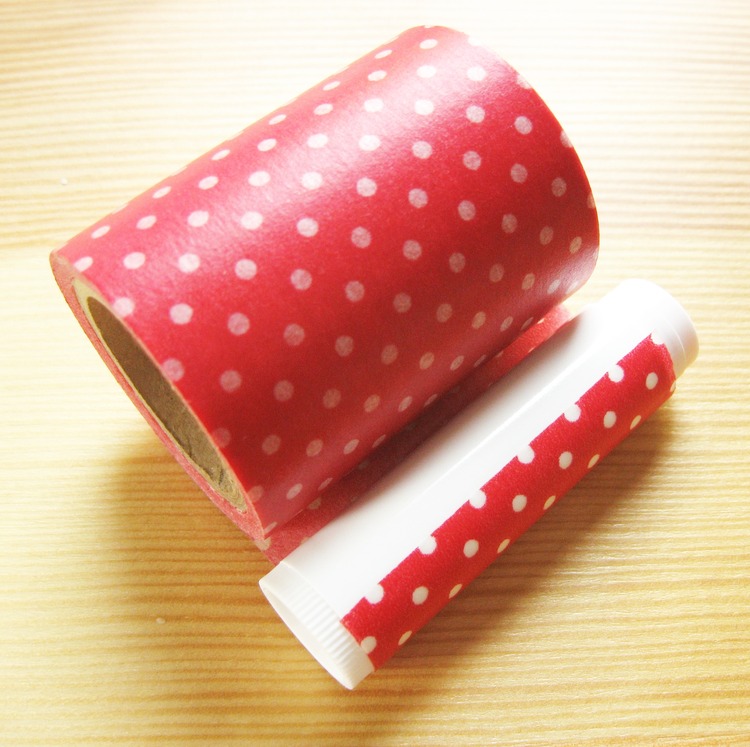 I found this pretty and very wide washi tape that was almost the perfect size for my tubes. All I did was carefully wrap it around the tube (avoid the turning mechanism at the bottom) and trim it with scissors following the polka dot pattern. I just folded that tiny overhang at the to over, it doesn’t seem to affect how the cap works. Almost everyone I know has a stack of washi tape hanging around, it seems to stick well to the tube plastic so this is a great chance to play around a bit. These definitely look pretty enough to gift!

That’s all! Now you can have a stash of lipgloss tubes at the ready in no time!