A provisional cast-on is really just a way to start knitting in the middle of your project instead of at the edge. It’s most often used when making socks, adding sleeves or in similar places where you may not want an edge. You form a row of loops that you start knitting from, and later you pick up the other end of those loops and knit in the other direction.

In this version of a provisional cast on you use a single strand of some other yarn/string as part of the cast on and then remove it later. I find this to be much more straight forward than some other methods. The best kind of temporary yarn is something that’s not fuzzy – a mercerized cotton, crochet cotton, silk, etc. – so that it won’t end up too attached to the work. The kind of provisional cast on shown is sometimes called an “invisible cast-on.” 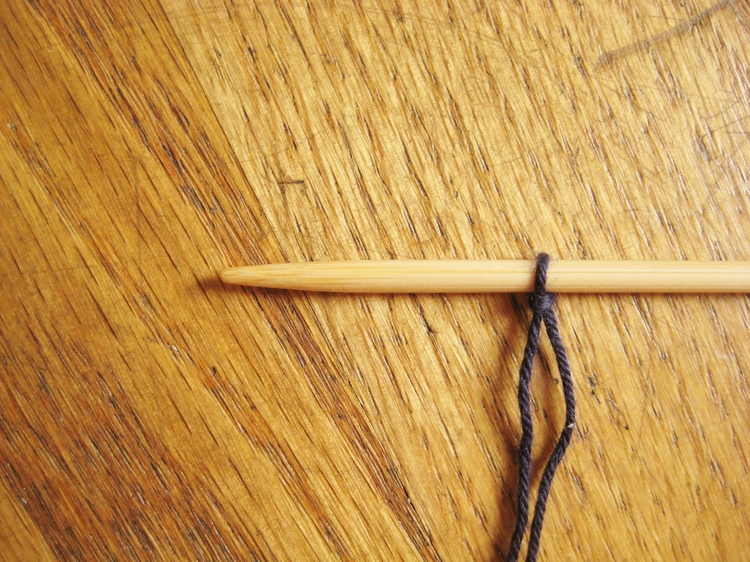 Start with a slip knot in your yarn, usually a few inches from the end unless you’ll be using it to sew up a seam.

Add your provisional yarn (from now on I’m calling it the “string” and the yarn you’re knitting with the “yarn.”) Place the string behind the working end of the yarn.

Wrap the yarn around the string, then in front of the knitting needle.

In front of the string…

In front of the needle.

Continue with “in front of the string, in front of the needle” until you have your desired number of stitches. Be careful to keep the string parallel to the needle and don’t let the yarn pull it into convolutions (this will prevent you from having enough yarn to pick up stitches later.)

In almost all cases you’ll want the same number of stitches on both sides of the provisional cast on. It is very important that the last wrap is around the string because the first wrap (the slip knot) was around the needle.

After your last wrap turn it around a knit a row (don’t put it down before doing this.) You can see from this picture that it looks like a loopy mess but that’s okay, it will work itself out later.

I usually tie the ends of the string together into a loose knot to keep the string from accidentally being pulled loose.

Knit until you’re ready to pick up the other side, then use a needle to follow the path of the string, picking up every loop of yarn around the string. If it is difficult to collect them all up try using a smaller needle to pick up the stitches and then knit them off of that small needle. The last loop you made might be a little tricky to find so count before continuing to knit. I leave the string in for a while because it’s a convenient line to count rows from and if you need to tear anything out the string will still be through that row of loops.